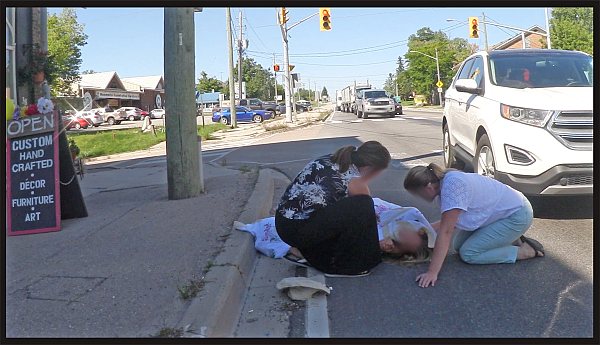 On September 23rd a female pedestrian walking her dog was struck by a car turning onto Highway 6 in Morriston.

According to witness Bill Knetsch of Morriston, the woman was walking her dog and crossed Highway 6 with the green light. A car turning off Badenoch onto Highway 6 failed to stop and struck the pedestrian. Mr. Knetsch stated that her injuries were severe enough to require surgery. Puslinch Fire/Rescue attended the scene of the accident to treat the injured woman but local residents were the ‘first responders’ on the scene immediately after the accident.

We have no information on any possible charges pending against the driver of the car.

After the accident the dog apparently ran away, but thankfully has since been found. I’m sure everyone joins me in wishing the victim a quick and full recovery.