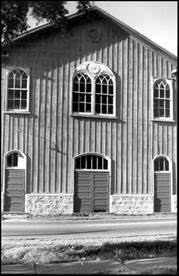 
“The Morriston Public School Board have been discussing the question of establishing a Continuation School in Morriston. They invited four other school boards to a friendly meeting Friday night last. There were also present the local clergymen, who took part in the discussion. Mr. Woods spoke on the Continuation School Act and Mr. Nash spoke on the moral aspects. Both were in favour of establishing such a class. John Ord thought that all the school boards in the township should be consulted and wondered if Morriston was the proper place for such a school. Mr. McDonnell thought that there ought to be two schools established, one in Morriston and another to the north of Aberfoyle, to accommodate the northern part of the township. Committees were appointed to investigate the matter further and it was agreed to ask all school boards in the township to meet in the Town Hall at Aberfoyle.”

A deputation from Aberfoyle School (S.S. #4) and the trustees of Morriston School (S.S. #8) first petitioned Puslinch Township Council at a meeting held on Jan. 8, 1906 to establish a high school class in the township. However, it was not until 1920 that a Continuation School was opened in Morriston, functioning for a few years in Morriston Hall.

The school offered secondary school courses, probably equivalent to the first two years of high school, to Puslinch students. Most were unable to attend secondary school in a neighbouring Guelph, Galt or Hespeler, as they were geographically too far from the towns. Students from Puslinch, who wished to attend secondary school, were forced either to board in a city or to take a train to the city, if they lived close enough to access a railway station. For this reason of inaccessibility, the education of the majority of Puslinch people ended at the completion of public school, until the advent of the high school bus route in the township. In 1923, a few Puslinch Continuation School students were able to complete “the lower school work for entrance to Normal”. Normal was a training programme for teachers.

Continuation School began on Sept. 7, 1920 in the Foresters Hall in Morriston, with Miss Brydon of Guelph as teacher.

In September 1923, Miss Margaret Stewart of Puslinch was teacher of the Continuation School.

There was also a continuation school in Aberfoyle, where Miss Cootes was teacher. It closed in 1922 and some of the pupils attended at Morriston in 1923.

The Inspector of Public and Continuation Schools, J. J. Craig appeared at Puslinch Township Council on May 30, 1921 to point out the need for a centrally located High School in the township, as the instruction and accommodation of third year pupils would require an extension of the existing equipment and facilities at Aberfoyle and Morriston. He stated that this could be most economically provided for by the erection of a modern building for use by the whole township. He intimated that the Council would be approached by the Township School Boards in regard to the matter.

John A. Ord came to Council on Feb. 6, 1922, on behalf of a committee of the Aberfoyle Continuation School Board, requesting Council to either grant or state a price on a site for a High School on the Township grounds. In February 1922, the trustees from the school sections, who favoured a central continuation school, held a meeting to discuss the prospect. However, the Aberfoyle correspondent stated that a “very large majority” of the ratepayers were not in favour of building a school, as the tax rate was already heavy. As a consequence, no secondary school was ever established in Puslinch.

In the dark year of the Depression, 1931, those Puslinch youth, who could access the Guelph Collegiate, were required to pay a fee of $2.00 per month, which their families could not afford. Puslinch Township Council paid half of the fee for 109 students. However, Council decided to discontinue this measure in January 1932.

In 1948, the Guelph Suburban District High School Board was established and Gladwin Crow was appointed as the representative for Puslinch Township by Puslinch Township Council. One school bus was employed to collect students throughout the township and deliver them to the Guelph Collegiate Vocational Institute.