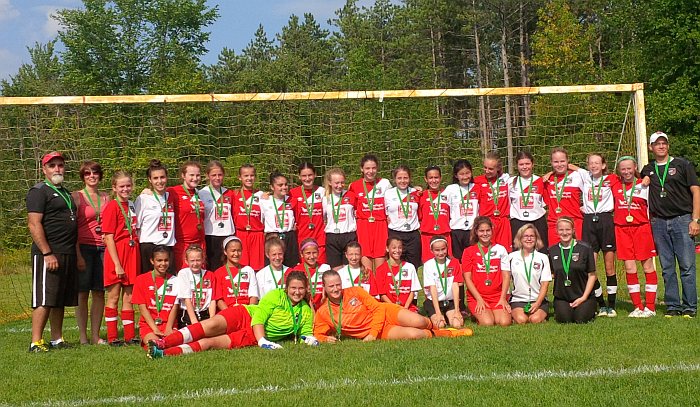 The 2015 outdoor season has come to an end. And, what a fabulous season it has been! The Timbits players had their last day on August 22nd. A big thank you goes out to all of the children, parents, coaches, and referees for making this program so successful.

The U10 and U12 recreational teams finished their seasons with one day festivals. Scores and standings are not kept for the U10 and U12 programs. All of the teams demonstrated excellent skills and had a great deal of fun. The U14 and U16 recreational teams competed in two day tournaments. The BU14 team had a very impressive year, finishing first in the regular season and winning a Silver medal in the year end tournament. The two GU14 teams placed third and fourth in regular season play but went on to be the Gold and Silver medal winners in the year end tournament. What an exciting way to end the season!

Puslinch Minor Soccer Club fielded three competitive teams in 2015. These included: Girls Under 13, Girls Under 15, and Girls Under 16. The coach of the GU15 team described the season in the following way, “Our GU15 team had a good year. Although finishing in last place in the division, the standings don’t reflect the tenacity and improvement shown in all the players. We played our Cup game Sept 12th. The game finished in a 1-1 tie, leading to overtime. No goals were scored resulting in a shootout. Unfortunately we could not capitalize and lost. We are looking forward to an even better year next year.”

The GU16 team were the League Champions beating Waterloo 6-1 in the final game! This means that they will have the opportunity to be promoted to the Western Ontario Youth Soccer League. They also went on to win the Cup. Congratulations to all of the rep teams and the team officials.

None of these programs would be possible without the many volunteers and sponsors associated with Puslinch Minor Soccer Club. On October 22nd, PMSC will hold its Annual Volunteer/Sponsor Appreciation Dinner at the Puslinch Community Centre. This is always an enjoyable evening, with good company, great food and prizes!

Try-outs for the 2016 Outdoor Rep teams are underway and indoor training for these teams will begin in early November. There will also be a fall skills program starting in November for U8 and U10 players. More information on PMSC can be found at www.puslinchsoccer.ca

Walk-in Registration for all 2016 Outdoor Programs will take place at The Puslinch Community Centre on January 20th.