Lieutenant-Colonel William Nicoll is remembered in Puslinch for his long service on Council and for his active military career.

From youth, William Nicoll was exceptional. His father died when he was 15 years of age and Will took charge of the farm. Although, due to his situation as head of the household, able only to obtain a primary school education at Badenoch School, he read extensively. He became a man of strong and independent ideas and many endeavours.

He joined the Morriston Infantry Company, a militia unit, in 1861 and was prominent in the military from 1863. The militia in Canada originated in New France as early as 1651, when settlers were required to maintain guards to prevent attack by the Iroquois. When the French were defeated by the English, the new British administration adopted the militia system. In 1794, it was given the force of law under the Militia Act. Throughout the years, these militia units were formed, disbanded, re-formed and organized into regiments and companies, often under different names. It seems that a militia was organized in Puslinch almost from the earliest days of settlement, as the obituary of John Hammersley (1802-1886) stated that he was a captain in the militia in 1837, under the command of Colonel Kirby. This was a remarkable feat, given that settlement began in the township in 1827.

In 1865, William Nicoll organized two battalions of 76 men each in Puslinch. Manoeuvers were held on Brown’s Lot on the north-east corner of the Brock Road (Queen St.) and Badenoch St. In 1866, he enrolled in courses at the Toronto Military School commanded by Colonel Lowry of the 47th Regiment and in 1872, at Gunnery School at Kingston. The Puslinch battalions travelled to a drill at Kingston in 1872. Twelve-day camps were held annually at Exhibition Park in Guelph. In 1877, he was promoted to captain and in 1881, he became a major. In 1895, he took command as lieutenant-colonel. While in charge, he won the Governor-General’s Cup five times for efficiency and the Mowat Trophy three years in succession. Lieutenant-Colonel Nicoll retired from the military in 1900. 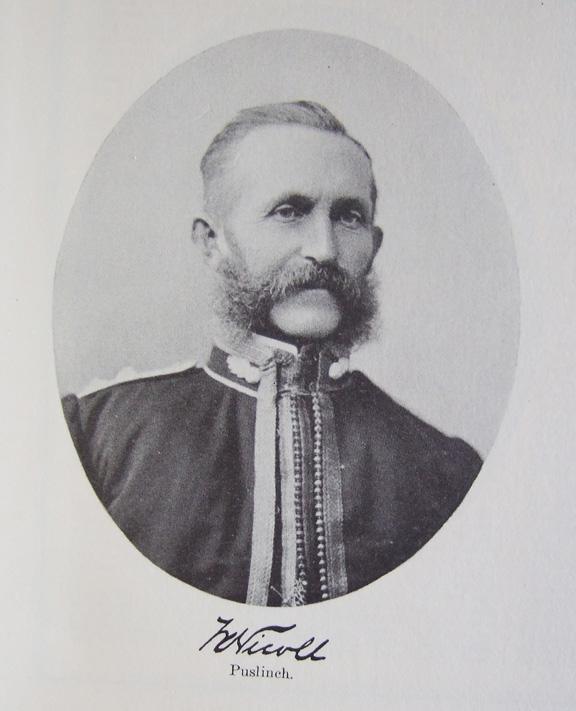 Another major area of his endeavours, and probably the one for which he was most notable, was the political arena. He had a long career in Puslinch Council, where he was elected in 1869 and served until 1893, becoming Deputy Reeve in 1870 and holding that position until 1882, when he was elected Reeve from 1882-1894. He was Warden of Wellington County in 1892.

As well, he was appointed Division Court Clerk in Puslinch in 1885 and he found time to work as auditor for Wellington County, Puslinch Township, the Puslinch Mutual Fire Insurance Company and the Puslinch Agricultural Society. He was a member of two lodges, the Sons of Scotland, Loch Buie Lodge and Speed Lodge, AF and AM.

Along with all of these activities, he was farming the lot his father had settled, “Creekside Farm”, to which he had added another hundred acres adjoining it in 1889, lot 34, rear concession 8. Here is an account of a barn raising at Creekside Farm on Saturday, June 5, 1886:

“LARGE BARN – A large barn was raised on the farm of Major Nicoll, Puslinch, on Saturday. The afternoon was wet and the work could not be proceeded with until four o’clock. Jacob Fritz and David Clark were selected as captains and sides chosen. Everyone worked with a will and in three hours, the erection was completed. The structure is 60×80 and of the most substantial nature, constructed on the most modern principles both for convenience and appearance. The workmanship is of a superior nature and creditable to both the frame, James McLean and the Messrs. Schultz, who did the mason work.”

Unconventionally, the dance to celebrate the event was held the following week on Wednesday, June 16, 1886, instead of immediately following on the evening of the raising:

“BARN RAISING AND SOCIAL – Wednesday last was one of the warmest days of the season but the extreme heat did not prevent the young folks from gathering at Major Nicoll’s residence, Puslinch, in the evening to enjoy his hospitality and celebrate the erection of his new, large and commodious barn. From all points came trooping youth of both sexes, until the total touched the hundreds and although the evening was close and the heat intense, dancing was begun and continued with all the zest imaginable, until nearly 3 a.m. Music was abundant and refreshments more so, the latter being furnished with a lavishness almost amounting to extravagance. Whatever the Major does is done well and this social was no exception and will long be remembered by those, who were present, as one of the happiest and most enjoyable of the many successful gatherings for which Badenoch and vicinity are noted.”

Lieutenant-Colonel Nicoll died on Jan. 3, 1921, after a busy life. He was buried in Crown Cemetery.

This information is from the 1906 Wellington County Atlas, Annals of Puslinch 1850-1950, Guelph Mercury articles and obituary and the records of Ancestry.CA.