When his niece, Anna McCormick Jackson, wrote about John W. Gilchrist of Puslinch for the journal of the Wellington County Historical Society in 1999, she entitled the article, “A Rich Life” and this was entirely apt.

John William Gilchrist died at his sister, Annie McCormick’s home on Sunday morning, Nov. 29, 1942, having done many things well. He was born in the Killean section of Puslinch, the son of Peter Gilchrist and Margaret Wilkinson of lot 10 in the 1st concession, on July 1, 1865. He resided in Puslinch most of his life, except for brief stints in Guelph and St. Catharines.

John was an intelligent child, eager to learn. He read books from the only source available to him, the Killean Sunday School Library. Pictures of carvings from a well-illustrated book about the Assyrians were retained in his mind, until he was able to view those described carvings in the British Museum in 1899.

John first exhibited an extraordinary interest in the violin, when a hired man played at his home. John was but three years old at the time. His interest burgeoned, after hearing four local fiddlers play at a dance in the Gilchrist home early in the new year of 1881. He acquired a fiddle in the spring of that year, when the Ramsay family gave him the front and back pieces of an old instrument. Another man, who was a framer and also a violinist, helped him to put it together and showed him how to tune it. He was 16 years old. After this, John W. Gilchrist constructed several more violins.

On April 2, 1881, John took the violin to the Ramsay home and learned how to play “Auld Lang Syne”. He received further instruction from fiddler, Norman Ramsay and August Begerow of Puslinch Lake, who excelled at the accordion. By harvest 1881, he could play a quadrille, “Duncan Grey”. After a few years of watching and listening to other fiddlers, John had mastered enough tunes to play for dances. In 1887, John Gilchrist played for fifteen dances. He calculated that he played for about 150 in his musical career. In 1898, John taught himself to read music.

His formal education consisted of five years of regular attendance at Killean School, followed by four years, most of it in the winters only, as his help was required by his father on the farm from spring to fall. As was usual at that time, since the eldest son would generally inherit the farm, John left school three months before his thirteenth birthday to work with his father on the farm. At 13 or 14, boys were considered able to begin to tackle a man’s work. After his father’s death, he continued to farm on his own until 1900, when he became a full-time carpenter.

From 1881 to the turn of the century, starting from the age of 16, he participated at more than fifty barn raisings, where men were chosen by the team leader for the task. It was the era when the original log barns were being replaced with bank barns.

He trained with the 11th Field Battery of the Militia, the Wellington Rifles, and rose to the rank of Captain. John W. Gilchrist was an outstanding marksman, who received lessons at the Kingston Gunnery School. He won the prestigious Paterson Trophy in Ottawa in 1897, and represented the Canadian Bisley team at an international competition in England for the Kolapore Cup on four occasions. In August 1898, he returned home with £11 and a Martin Rifle. In 1906, while in England for a shooting match, he also visited his parents’ birth place in Kintyre, Argyleshire, Scotland. During World War I, he was an rifle instructor at St. Catharines. 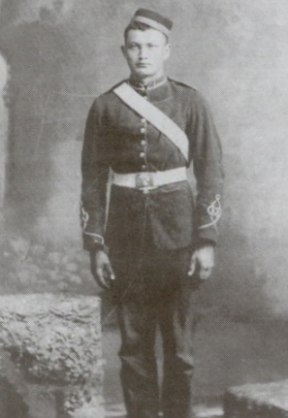 Young John Gilchrist was a natural athlete and took part in sports. In December 1881, he joined the Puslinch Lake Literary and Debating Society and Football Club, a group which met in the Temperance Hall at the Lake and was still a member in 1890. In the fair weather, the Society played football, now known as soccer, and in the winter months, held debates. Both activities were popular during this time.

John was involved in most aspects of township life. During his life, he was census taker, pathmaster and county constable. The following is a letter, sent to Puslinch Township Council, written by John on May 24th 1890. It was jointly signed by John W. Gilchrist, William Zimmerman, John McDonald, William J. Little and Peter Gilchrist.

“To the Reeve and honourable Council of the Township of Puslinch, in council assembled:

We, your humble petitioners, most respectfully direct the attention of your august body to an embankment on side road between lots 10 and 11 about 150 yards north of the 2nd concession. This embankment, though several feet high and nearly 50 feet in length, is unrailed and in places scarcely 7 feet in width. Thanks to the care of a benign Providence, we have so far escaped personal injury. And, though we most firmly believe that your united supplications for the protection of Providence in our behalf would result in our being guided over this embankment by a cloud during the day and a pillar of fire by night, yet a moderate grant to widen and rail that said embankment would be sufficient for our personal safety and would also be the exercise of those functions of magnanimity and fostering care with which your honourable body has so long been associated. And further, in our humble opinion, such action would furnish our esteemed commissioners another opportunity to display to the travelling public that administrative ability and constructive skill which has been so marked a feature of their service in this locality.”

During his later years, he assisted Colonel John Bayne MacLean in assembling and displaying the remarkable collection of antiques at the MacLean Museum in Crieff. Having an interest in the history of Puslinch, John W. Gilchrist wrote to Catherine McIntyre of Niagara-on-the-Lake in 1941, to request the manuscripts of Matthew McPhatter. The documents were thus returned to Puslinch, preserved and later published as the “McPhatter Letters”, reminiscences of the pioneers of the township about the earliest days, for future generations.

He was a skilled carpenter and carver. He crafted wooden models of farm implements and his excellent model of the Crieff Church may still be viewed at the Wellington County Museum and Archives.

He was a writer. On September 12, 1929, he began the first of seven handwritten notebooks of 800 pages, describing his childhood, his career as a carpenter and barn-raiser, his endeavours as a fiddler and his travel in Scotland. Sadly, most or all of these were destroyed after the death of Anna Jackson. Around 1920, he contributed widely to newspapers and other publications such as “Rod and Gun”, “Farmer’s Sun”, and “Weekly Fun”. John Gilchrist’s work was well received, noted for combining a compassionate sense of humour with a wealth of stories on early days in Puslinch Township.

Fittingly, John W. Gilchrist was buried with his ancestors in Killean Cemetery in this township, where he participated in the life of the community to such a wide extent.