King’s Sergeant John A. Wilkinson, died at 72, on Thursday, May 15th 1947, at his home at 32 Mont St. in Guelph. He was a veteran of the Boer War, now more diplomatically known as the South African War, and possessor of one of the most colourful military records in Canada at the time.

Born in Puslinch about 1874, his mother was Catherine Wilkinson but his father’s name is lost in the mists of time. He was named after his grandfather, John Wilkinson of lot 19, rear of concession 2, Puslinch. His mother, Catherine married William Laur in 1880 and John Wilkinson had a number of half-siblings. He grew up on the farm in Puslinch and attended Killean School as a boy.

When 15 years old, he enlisted with the “A” Battery, First Brigade Field Artillery of the militia. In 1891, he was chosen for an eight-member shooting team to represent the Battery at a competition at Kingston, where he recorded the highest score of any artilleryman in Canada. He was promoted to sergeant in 1892. In 1894, he enrolled in a 3-month gunnery course at Kingston. His ability with a gun won him a place on the 20-man Canadian Artillery Team, representing Canada at the British Artillery Competitions in August 1896. The Canadian team captured the Queen’s Prize by defeating all of the competing teams from throughout the British Empire. He was promoted to Sergeant-Major in 1896. 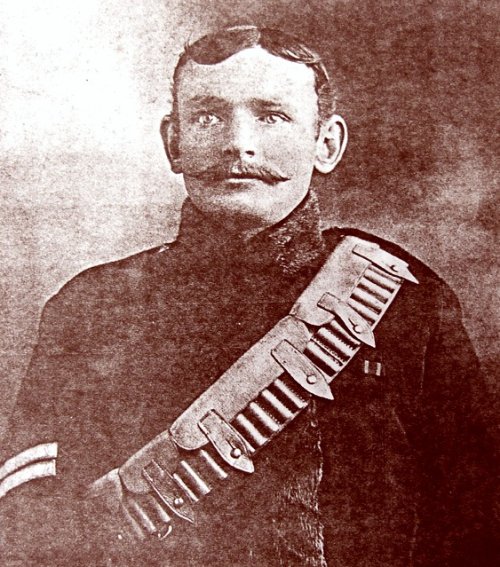 Upon the outbreak of the South African War between the Dutch Afrikaners and the British in October 1899, he enlisted for active service with the Canadian Mounted Rifles, sailing with the 3rd contingent from Halifax for Durban on January 14, 1900. He was 26. He was one of 7,380 Canadians who went to the aid of the British Empire. 284 Canadians were killed and 252 were wounded in the conflict. 261 Canadians were buried in South Africa in graves scattered across 51 sites, some on isolated farms. During the war, John Wilkinson served in the Orange Free State, Cape Colony and the Transvaal.

He was horribly wounded at the battle of Boschbult on March 31, 1902, where he was among a few men, who made a brave stand. He suffered more than ten bullet wounds, which resulted in the loss of his right arm four inches below his elbow, of his right eye and the hearing in his right ear. He lay injured on the battlefield under a cold rain for 4½ hours, while the battle raged around him. When finally recovered, his arm was amputated in a bell tent under the light of two lanterns, without any facilities for heating water. He lay on the ground in a tent, with six other badly wounded men, for eight days before being transported, by a wagon pulled by mules, over 98 miles to the base hospital. The trip took three days and two nights. Doctors were amazed at his recovery.

I’m going to write you another line or two. I am getting along fine. My eye is healing splendidly. We have nice weather here now, though it is very cool at nights, with frost sometimes.

I had a letter from Lord Kitchener the other day, informing me that I was made Sergeant from the first of April and that I was recommended for a Distinguished Service Medal. This will make quite a difference to my pay. I now get $52. a month and $100. goes with the Distinguished Service Medal and it ranks next to the Victoria Cross for bravery on the field. Besides this, having the rank of Sergeant will increase my pension. Nevertheless, I am very sorry I got hit so hard.

This is going to be a fine country a few years after the war is over. Carpenters get $3.50 to $5. a day and they are very hard to get at that. There is a peace conference on just now; it closed last night, but you will hear the war news much sooner than I. If they don’t surrender, I don’t think they can fight much longer, as they are in a horrible condition. Some of the prisoners we got had old sacks on for pants and no shoes or socks.

It must be quiet around Clyde now, since the Minchin family are gone. Jack is improving very slowly. I am quite sure he will be invalided home.

I think I will close for this time, as it is nearly tea-time. I hope you can read this scribbling for I wrote it in a great hurry. Trusting you are all well and getting along well at home. I will close.

From your true brother, as ever,
Jack”


In June 1902, he was sent to Nettley Hospital in England and he arrived home in December. A large crowd greeted him at the train station in Guelph on his return. John Wilkinson and a number of his relatives were placed in cabs and taken to the Wellington Hotel for the evening.

In 1903, Lord Kitchener recommended that he be awarded the rank of King’s Sergeant, which, according to Colonel D. S. Barrie, was bestowed as a personal tribute by the King on a very few, non-commissioned officers, who displayed gallantry on the field. As well, he was awarded the Distinguished Service Medal, the only Canadian to be honoured in this way. He was presented to Queen Victoria, King Edward VII and Queen Alexandra and later, on their visit to Guelph in 1939, to King George VI and Queen Elizabeth.

On January 6, 1903, John Wilkinson and Corporal John K. Minchen were honoured at a supper in the banquet room of the Commercial Hotel in Guelph and a public reception was held at Guelph City Hall. Military and civilian dignitaries paid tribute to the men in speeches and presented them each with a purse of $125.

Although handicapped, he had every intention of returning to normal life and indeed, he lived a full life. He was sensitive about the changes to his appearance wrought by his injuries, however, as from that time onward, he was always photographed showing only his left side.

He served on Puslinch Council from 1905-1907 and again in 1909. He was Reeve of Puslinch Township during 1910-1911. For ten years, he was auditor for Puslinch and for Nassagaweya Townships for twenty-five years. He audited for Wellington County for twenty-five years, until illness prevented him carrying on. From 1927-1934, he was Supervisor of Releases of Ontario Hospitals. In 1938, he opened the Wilkinson Insurance Agency at 15 Douglas St., Guelph.

He was a member of St. George’s Anglican Church in Guelph and belonged to lodges, the Sons of Scotland, Waverley Lodge, A.F. and A.M. and the Scottish Rite of Canada.

By 1911, Hattie and John lived on Victoria St. in Morriston. They later moved to Glasgow St. in Guelph. 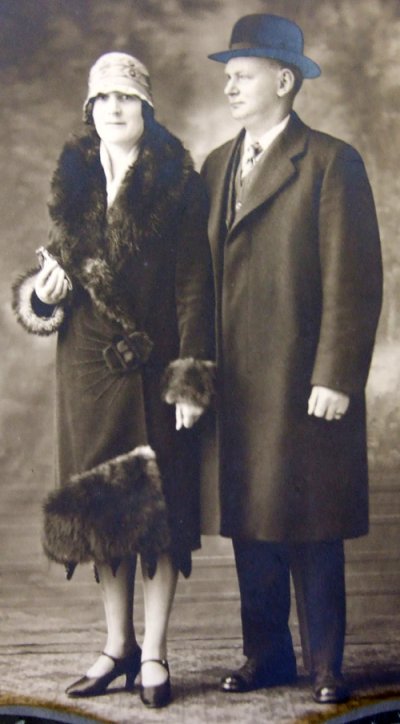 At his death, his wife received a letter of condolence from the King and Queen. Flags were flown at half-mast at Guelph City Hall and Wellington County buildings in his memory. A private funeral service was held at the McLanaghan and Ross Funeral Home on Norfolk St. in Guelph on Mon., May 19 at 2, followed by a public service at St. George’s Anglican Church at 2:30. In addition to the regular pall bearers, six relatives or friends chosen by his family to carry his coffin, there were also present honorary bearers, who were all veterans of the Boer War. Reeve Albert McWilliams and Deputy-Reeve W. J. Hunter were among those present from Puslinch. John Wilkinson was buried in Mountview Cemetery in Galt.

For more detailed information on the exploits of John A. Wilkinson, see Wellington County History, Volume 27, 2014, an article by Anna Jackson, with additional research and editing by Ian Easterbrook.