WILDLIFE AND MANKIND IN PUSLINCH

The relationship between the pioneers and the wildlife of Puslinch does not make a pleasant story for the nature lover. In fact, the settlers’ treatment of the natural world could only be termed painfully destructive. To understand why our ancestors responded to God’s command of stewardship as they did, it is necessary to know what they faced, when they arrived in the New World and how it differed from the rural landscapes, which they knew as normal in England, Scotland, Ireland and Germany.

By the 19th century, the countries, from which they emigrated, had an established agrarian life for many previous centuries, where families grew crops and kept livestock on sections of land. In Europe, wildlife had long been looked upon as an impediment to farming and larger species had been either isolated to forested areas and non-arable land or eradicated altogether, as was the case with bears and wolves. This was the order that the settlers were familiar with and which they did not question but accepted as proper.

By contrast, in North America, native peoples were not settled on plots of land and did not engage in extensive crop cultivation or keep large herds of livestock. Instead, they lived largely by harvesting wild animals, with some temporary cultivation of plots of land. Therefore, it was in their interest to live in harmony with nature, ensuring that a balance was maintained. When the wildlife had been hunted and the earth been tilled for for some years in an area, the First Nations peoples moved to a new district to allow the former to regenerate. This ensured a healthy balance of nature.

When the European settlers arrived in Puslinch, they found a country replete with wildlife, in the main, unafraid of man. John Winer reported of those early days in The McPhatter Letters:

“I have seen deer run through the bush like big flocks of sheep and very often chased closely by a pack of wolves”.

John Arkell wrote, in February 1831, to Thomas Arkell in England that:

“The flocks of long-tailed pigeons, which arrive here in spring and leave again in the fall, are beyond description.”

He was referring, of course, to the passenger pigeon.

While they found this useful to sustain them during those first difficult years, when they lacked everything else, they also found large wild animals, to which they were not accustomed, threatening. As well, the mammals were detrimental to their hard-earned, domesticated livestock and their crops, upon which the lives of the pioneers’ very large families depended. Thus generally, like the great forests, they were viewed as a hindrance to progress, pests or fearsome predators, to be destroyed.

Selections from The McPhatter Letters, a collection of stories from the pioneer generations made by Matthew McPhatter in 1897, edited by Anna Jackson and published by the Puslinch Historical Society almost one hundred years later, illustrate this point well.

Charles Callfas, whose parents settled at Morriston, related that his father, John Callfas, built a shanty, 16 feet square, which housed eighteen members of the Callfas family, as well as the Morlock family, for several months, until a second shanty could be erected.

“The wolves stationed themselves on a hill near by and kept up howling until the light was put out; then they would pace around the shanty in flocks. In broad daylight, bears came looking through the windows and took pigs out of the pen. …….. The cattle bravely defended the sheep against the wolves but even then, they could scarcely be kept.”

Shortly after the family settled in Badenoch, John Clark Sr. bought a pair of steers in Flamborough. That very night, the wolves killed and devoured them. Felix Hanlon related how, when carrying flour home from the mill in Guelph, wolves overtook him in the bush. He climbed a tree and stayed there until the morning, leaving the bag of flour at the bottom, where the wolves trampled it until irrecoverable.

“I can remember the first young cattle my father owned. They were killed by the wolves and in hunting for them, we found the remains of one of them and my father and Mr. John Wise went out to watch the carcass and shoot the wolves on their return for another feed. All of a sudden they saw about 25 wolves and they were so afraid of them, being so numerous, that they quietly took to their heels for home and never fired a shot at them.”

Given these experiences, then it is perhaps not surprising, that the first mention of wildlife in Puslinch in a newspaper is “A Bear Hunt in Puslinch”, in the Thursday, Jan. 6, 1853 issue.

“A large bear having been seen a few days since, near the residence of John Cockburn, Esquire, on Saturday last, a few of the inhabitants turned out in hopes of finding his whereabouts and after traversing a large swamp for three or four hours, one of the party got the chance of a shot at him, within about thirty yards but which failed taking effect. Just as it was getting a little dark, Mr. Richard Ellis, who was one of the party, conceived that he saw Bruin lying right before him in the swamp and immediately fired into an old log, which of course, lay dead upon the spot. Thus ended the first day’s sport.”

By this point in time, bears were scarce in Puslinch; old-timers reported that there was never a bear seen in Puslinch after 1855. Determined to eradicate them completely, the hunting party of ten men and dogs set out and succeeded in killing the animal the following Monday. They estimated that the bear was seven feet, ten inches in length, very large and powerful, although not as fat as bears usually were at that season. The next day, the carcass was sent to Hamilton, where it was sold to a butcher named Duff for $12. 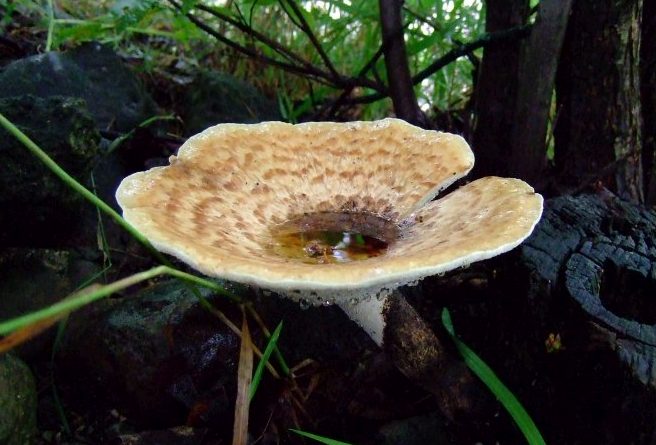