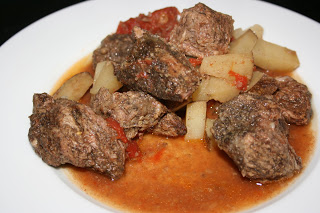 Lamb cuts are particularly favourable to slow-cooking. Because of the robust nature of the meat, it’s happy to soak-in flavour while tenderizing.

But anyone who has done serious slow-cooking knows that it has its own set of challenges – identifying the perfect time to add the vegetables so they don’t become mushy, or when to season, or not. (Our solution is to add wine to everything!)

The Valensbrae Farm Family, love Indian food! This recipe – Crock Pot Lamb Vindaloo – allows our family to serve up a hearty meal without spending too much time in the kitchen.

In researching slow cooking we were shocked to learn that the term Crock Pot is neither a ‘thing’ or an ‘action’ but a brand name. This recipe could be just as easily been called Black & Decker Lamb Vindaloo or Cusinart Lamb Vindaloo.

The original slow cooker, however, was indeed the Crock Pot. Invented by Irving Naxon in 1936 the idea originated from his Lithuanian mother who told him about the bean-based stew she made in the village bakery.

Naxon’s daughter told US broadcaster NPR: “The stew, known as cholent, is a traditional Jewish dish that cooks all day. It’s rooted in the Jewish Sabbath, the day of rest in which observant Jews aren’t suppose to do any work. The stew goes on the heat before sundown Friday night, when the Sabbath begins, and coosk all the way until the end of Saturday services the next day. As the ovens were turned off for the Sabbath, the pot of cholent would be put in the oven, and that slow residual heat over the course of the 24 hours would be enough to cook the cholent.”

In the early 1970s, Naxon sold the Naxon Beanery to Rival Manufacturing, which then rebranded it to the Crock Pot. It was heavily marketed to working mothers with the idea that dinner could be prepared before they left for work.

The Crock Pot sold millions through the ‘70s. Sales started to slow in the ‘80s with the advent of the microwave. According to Consumer Reports of 2011, slow cooking remains as popular as ever, with 83 percent of families owning a slow cooker.

The original Crock Pot design hasn’t changed much but certainly has many new features including, removable inserts, adjustable heat and in some cases even WiFi. Enjoy!


Trim lamb for excess fat and into stew-meat sized pieces. Toss in your slow cooker with all of the dry spices and onion. Let it sit overnight in the fridge. This step isn’t absolutely critical but it does add to the flavour as the meat soaks up the spice flavor.

Add the apple cider vinegar, potatoes and the can of tomatoes.

Have you got a lamb recipe you’d like to share? We’d love to add it to our collection!