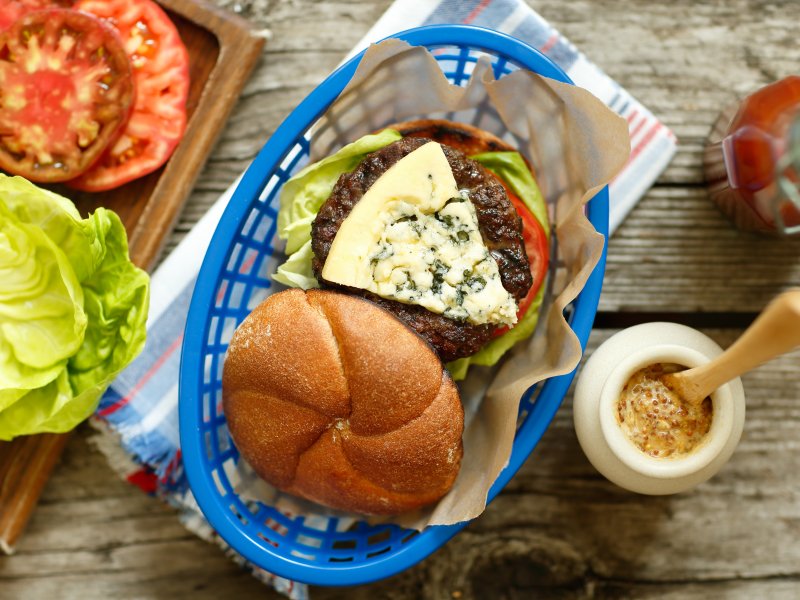 The Almighty Hamburger – Always great, no matter what’s inside!

When it comes to summer cooking, the hamburger has to be one of the most versatile options.

A bevy of fillings from ground beef to buffalo, venison, lamb, kangaroo, turkey, elk, salmon or even a veggie variety. And that’s the just fillings, there is the same selection in buns and the possible combinations of toppings is simply endless.

So, who invented the hamburger?

According to Wikipedia, the origins of the hamburger are a little vague. Hamburg steak is reported to have been served between two pieces of bread on the Hamburg America Line, which began operations in 1847.

There is a reference to a Hamburg steak as early as 1884 in the Boston Journal. On July 5, 1896, the Chicago Daily Tribune made a highly specific claim regarding a hamburger sandwich in an article about a Sandwich Car.

Wikipedia states that Congresswoman Rosa DeLauro credits Louis Lassen, a Danish immigrant, owner of Louis’ Lunch in New Haven, Connecticut as the creator of a meat patty between two slices of bread in 1900. Of course there were rival claims by Charlie Nagreen, Frank and Charles Menches, Oscar Weber Bilby, and Fletcher Davis.

While Castle traces the origin of the hamburger to Hamburg, Germany, the lofty hamburger didn’t gain national recognition until the 1904 St. Louis World’s Fair when the New York Tribune referred to the hamburger as “the innovation of a food vendor on the pike”.

No one person can be credited with inventing the hamburger. With very little written history, it’s quite possible that more than one person came up with the idea in different parts of the world at the same time.

The one thing historians do agree on – the name hamburger originates in Hamburg, Germany’s second-largest city.

This recipe for lamb burgers comes via AmericanLamb.com. Notice that very little is added to the raw ground lamb meat allowing for the true flavours to seep through.

Serve with your favourite salads and wines.

Prepare a hot fire in a charcoal or gas grill.

In a large bowl, mix the lamb with a few big pinches of salt and several grinds of pepper, tossing gently with the tines of a fork; be careful not to mash the meat. Divide the mixture into 4 portions and form hamburger patties, pressing gently to shape.

Meanwhile, grill the buns, cut side down, until toasted, about 1 minute. Arrange the tomato slices, lettuce leaves, pickled onions, and any additional condiments on a large serving tray. Serve the burgers and toppings at the table, and let everyone assemble their own perfect lamb burger. Enjoy!

Have you got a lamb recipe you’d like to share? We’d love to add it to our collection!

With references from: Wikipedia | American Lamb