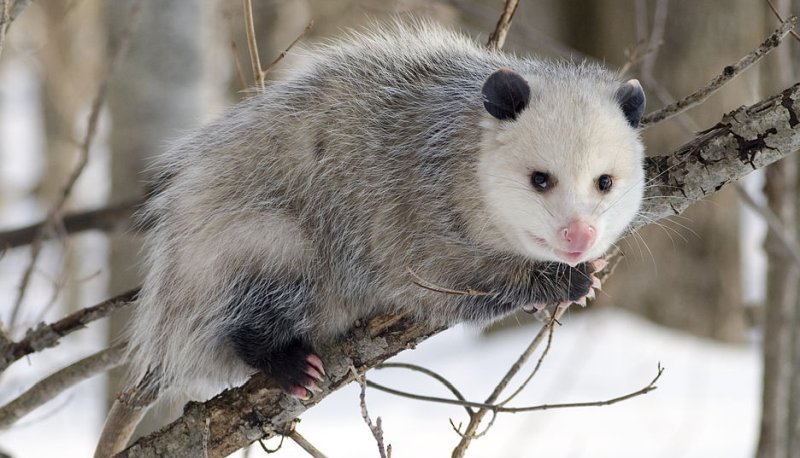 From EAST OF ABERFOYLE
by Marjorie Clark


As I rounded the corner to behind the house, the sky was turning to india ink and there, in the glow of the backdoor light, it was – a marsupial, gathering up bird seed. A marsupial is an animal, which carries its young in a pouch on its body. The Virginia Opossum is the only marsupial in Canada.

The Opossum is a relatively recent immigrant, having arrived in Puslinch about 1980. I recall my father, in an attempt to prevent the theft of his store of bird seed, having captured one in his live trap, calling to my mother, “Mrs., come and tell me what this little animal is.”

As its name suggests, it was first identified in Virginia about 1607 by Jamestown settler, John Smith. The word Opossum is an adaptation of the Powhatan First Nations name. It was at that time resident in Central America and the south-eastern United States. Since then, a Ministry of Natural Resources scientist says, it has moved northwards, probably due to climate change.

Dining on seeds is not unusual, as the Opossum is an omnivore and will eat absolutely anything animal or vegetable, regardless of its state. It is immune to botulism, which is good, since it will ingest the rotten and the rancid. It is, therefore, a sanitizer of the natural world.

With an unpreposessing appearance, it is often mistaken by city-dwellers for a giant rat. About the size of a cat, with large, black pupils in its eyes, a long, whiskery muzzle containing 50 teeth, more than any other mammal, it has hairless ears and a scaly tail, which frequently suffer from frost-bite in extreme cold. Its bare tail serves as a brace for stability, when climbing trees.

Despite its looks, the Opossum is harmless. It will avoid humans and pets. It doesn’t chew plants or trees and it doesn’t dig. Nocturnal, it sleeps by day and seaches for food at night. If encountered, it may bare its teeth, hiss or growl. As it lives in areas with trees, swamps and streams and does well in the suburbs, Puslinch is an ideal home.

The Opossum is extraordinarily clean, using its tongue and forepaws to groom frequently and thoroughly. During this intensive process the Opossum ingests deer ticks, which carry Lyme Disease, from its fur. This function makes it a beneficial animal. It is unlikely to develop the disease itself due to its very effective immune system. It is also resistant to rabies, as it has a low body temperature.

The Opossum traverses its territory at night in search of food and water. It must forage the year round, as it does not accumlulate body fat for winter and does not hibernate. It will den anywhere that is dry, sheltered and safe and it will move from den to den every few days for safety. The dens are filled with leaves and grass as insulation, carried in by its tail.

It is reproductively prolific. After a gestation of about 13 days, as many as 20 bumblebee-sized, undeveloped young are born. They crawl to their mother’s pouch to nurse and continue growth. As many as 13 babies will survive and are raised entirely by their mother. At about 60 to 70 days the little ones begin to leave the pouch and return to nurse. Around 80 to 90 days, they will start to ride on their mother’s back, firmly attached to her fur by their feet and tails. The juveniles seem to enjoy hanging in the trees by their tails. At 3½ months (105 days) the young will embark on forays from the den on their own and will soon disperse.

It was once and possibly still is, eaten by humans in some parts of the U.S. Beneficial and unique in Canada, this small creature, more intelligent than a dog, will live about two years.