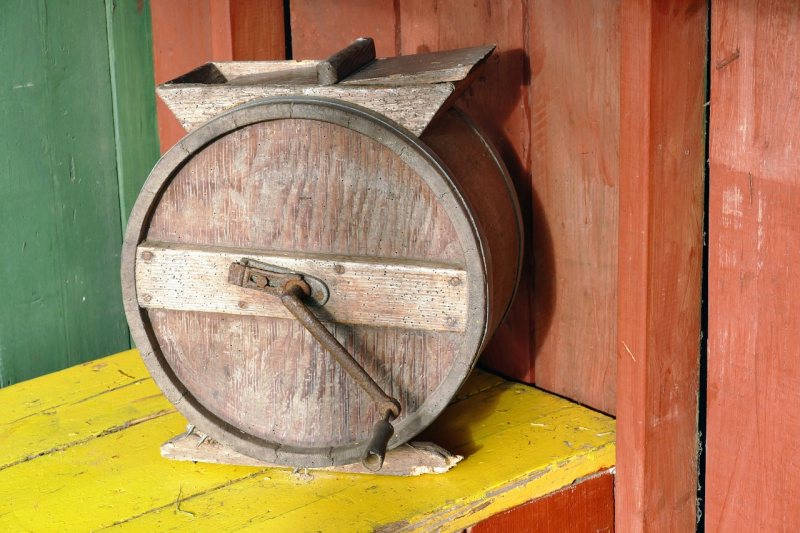 THE WARLOCK
A Traditional Highland Scottish Story
as written by
John W. Gilchrist of Puslinch


This warlock story happened in harvest time, long ago in Scotland. Everyone on the farm was out harvesting. The strong men swung their sickles, the younger people gathered the grain into bundles to be tied by the head man, and the old people stooked. This left the good housewife alone in the house, preparing the noonday meal. This required her to churn butter. This was a frequent task, easily done; but on this day the butter would not form, and as the sun’s shadow was creeping to the midday mark on the doorstep, the housewife began to panic. Had there been time, she would have gone to the woods for an infallible remedy. She would have secured a small ash tree which forked into two branches. Then she would have cut it at the fork and stirred the cream with one branch while she thrashed the cow with the other (not to punish the cow, but to drive out the witch’s spell). This never failed if done in the proper spirit. There was no time, however.

At this point, while she was still churning, a strange man came in the door and asked for a drink of her buttermilk. Ordinarily she would not have thought of refusing such a small request, but because of her problems she gave him a curt rebuff. The man reached his hand up to the lintel of the door and then turned away.

At once, she let go of the churn dasher and began to dance about the churn and sing: “The warlock sought a drink, He got nane, he got nane.”

The harvesters, by this time, were anxious to be called to dinner, and the head man sent a little girl to see what was wrong. As soon as the little girl entered the house, she at once joined the housewife in dancing about the churn and in singing the same song. Then a reliable boy was sent; and no sooner had he passed the door than he joined the other two in dancing and singing. From the field, he was seen entering the house and, as he did not come out again, the harvesters went to the house in a body. The sight of the three dancing inside stirred their curiosity, but as each one entered he at once began to dance and sing the words.

The head man was wise. He did not enter the house and he made inquiries which led to his sending a swift runner with a piece of silver after the strange man.

The stranger came back, put his hand up on the lintel, and the dancing and singing stopped. When the churn was examined, the butter was found ready. The strange man disappeared, but this was not thought peculiar. With the silver he would likely look for a drink more to his liking than buttermilk.

The story is no longer told but the tune of the song was remembered by violinists.