Wellington Pit, operated by Capital Paving Inc., in the Town of Puslinch, has received the 2018 Progressive Rehabilitation Award and the Judges Choice Award from the Ontario, Stone, Sand & Gravel Association.

From December 2017 to May 2018, Wellington Pit rehabilitated 17.5 hectares of land as part of its ongoing effort to return the pit to agricultural use. Work began by grading the area and employing cut and fill methods to create a uniform landscape. Then approximately 161,077 cubic metres of subsoil was transported from a nearby berm and applied to an average depth of 900mm. Following that, 42,600 cubic metres of topsoil was applied at an average depth of 250 mm over the top. For the final stage of rehabilitation, Wellington Pit spent two days removing stones larger than two inches in size with its tractor and stone picker, ultimately removing 400 tonnes of stone from the topsoil. With the area ready for planting, landowners immediately planted corn and soybean as their first crops.

Presented at OSSGA’s 2019 Annual Conference and AGM at Hilton Hotel in Toronto, Ontario, the Progressive Rehabilitation Award recognizes ongoing efforts of individual operators in progressively rehabilitating their sites in accordance with their site plans.

“Capital Paving and its employees are extremely honored to be continually recognized for its ongoing commitment to give back to communities in which it operates as well as completing quality rehabilitation work at its aggregate sites,” said George Lourenco, Resource Manager of Capital Paving.

The OSSGA Industry Recognition Awards Program recognizes a wide range of activities that contribute to a progressive image of our member aggregate producers and the aggregate industry as a whole. A key goal is to raise the bar in the industry by highlighting operations that go above and beyond what is required by legislation.

“We encourage our members to be sound stewards of the lands on which they operate, and to be engaged and valued members of their community,” said Norm Cheesman, Executive Director of OSSGA. “All of the award winners this year have met and exceeded those expectations.” 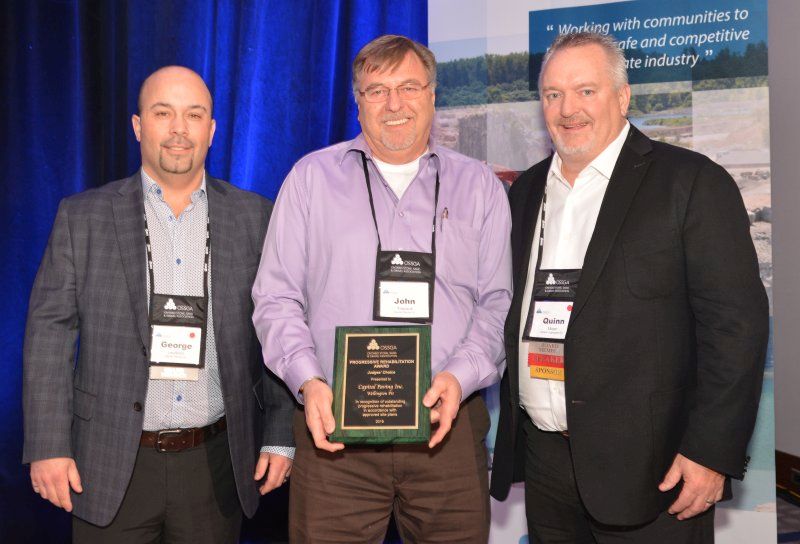