This is part eight of a travel series by Margaret Hauwert. View Part seven HERE. Be sure to scroll down to see all the included pictures!

On our hour drive from the airport I could tell this next leg of the trip was going to be different. All the beach we could see while driving had very fine sand with clean looking water, palm trees, lots of cafes, mountains, marble and jade statues for sale and best of all we would be staying in a hotel for the next 3 weeks. Just thinking about not having to make the bed, clean the dishes, sweep the floors or make breakfast was going to be a nice change.

One of the couples we were travelling with choose this location as were close to the city but not too close. Our hotel located in Hoi An, is called Sincerity Hotel and Spa. It is classified as a 4 star according to their country’s rating system. Our fellow travellers were greeted like old family members as all 4 of them had been here before and LOVED it. Our room was as big as a family room and had a lovely balcony. There was a schedule for a free shuttle to take you to the beach and at a different time to the old town. This was a welcome relief after walking around town in 30C heat with humidity. Breakfast was included with our stay.

At the airport, we decided to get our new SIM cards. You know when something seems too good to be true and usually it isn’t, well that turned out to be the 9$ American unlimited data plan we all got. One week later we were all adding money to our accounts. So next time we will go to the phone store located in the town we are in.

There were deals to be had but not as good as Bangkok. Our new currency was called dong. Just like before cash was king. The exchange now was 1 million dong equaled $64.00 CAD so it was like learning a new language. Back in use was our converter app called ex currency, it wasn’t perfect but it worked. The worst thing about this paper money was that it all had similar colour and sizes, so it took awhile to determine the differences between a 100,000 and a 10,000. No coins, so that was a good thing. The downside of money was now we could only withdraw $5 million ($295.00) at a time from the ATM instead of the 10 or 15 million I wanted too. I was hoping to avoid some bank fees.

Restaurants were plentiful and were between a 2 and 15 minute walk away.

We would continue to buy food at the grocery store to make one meal a day in the hotel room to cut down on costs. Gone were the 7 elevens and instead small kitchen sized mini marts to buy a small variety of foods. The two grocery stores were also much smaller than what we were use to but we managed to buy cheese, apples, peanut butter, carrots, crackers and of course some cookies. We eventually found a large outdoor market five blocks away where we purchased more apples and carrots.

Driving here took on a life of its own. There were some lights but regular drivers would ignore these and drive the opposite way to avoid a light. It was like playing chicken but on a highway. I can remember the first day we took out the hotel bicycles, it was nerve racking. If the road was too busy, it would not be unusual for a motorbike to drive by you on the sidewalk. Needless to say there were lots of horns honking. Order of hierarchy was: Large buses, trucks, passenger cars, motorcycles, bicyclists and then the walker. At any given intersection on the non streetlight ones, a horn was sounded to make sure you knew what was coming. It was expected that the louder the honk determined who crossed the path first. As a pedestrian I always looked both ways when crossing the road, as at any given time a motorcycle would beep and come out/or around a vehicle out of no where. It appeared that most of the drivers knew about these unwritten rules of the road.

Just like with any society there are divisions of classes with regards to financial situations and here is no different. To me, the Vietnamese people appear to be a very social group and often sounded like they were partying as the language has various tones. Most of the people I have met are always smiling and laughing while playing cards to pass their day.

As a group we continue to only be six, however on Wednesday we look forward to meeting one of Nina’s cousins. Donna is bringing 4 new peeps with her. We will then be a group of 11. I can hardly wait as in the new group there will be a retired teacher and a retired principal. I’m anxious to pick their brains. 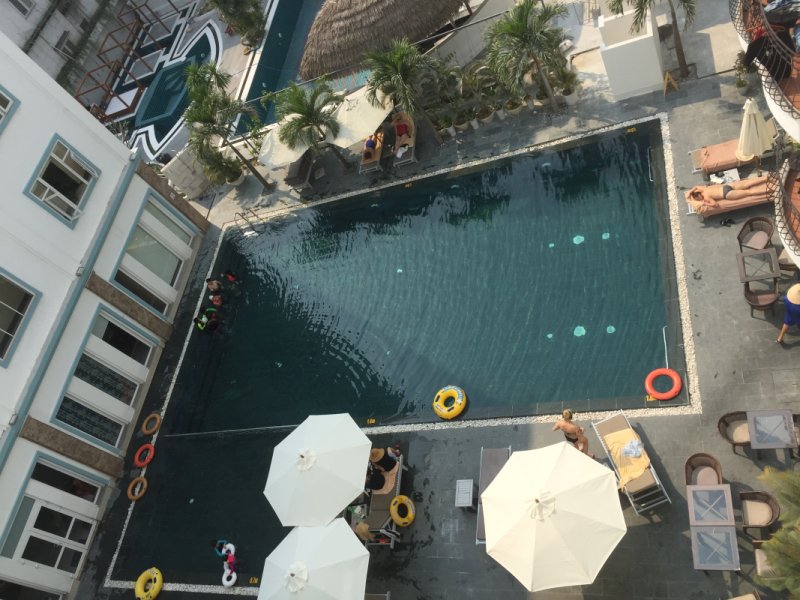 Our pool from our 5th floor view. 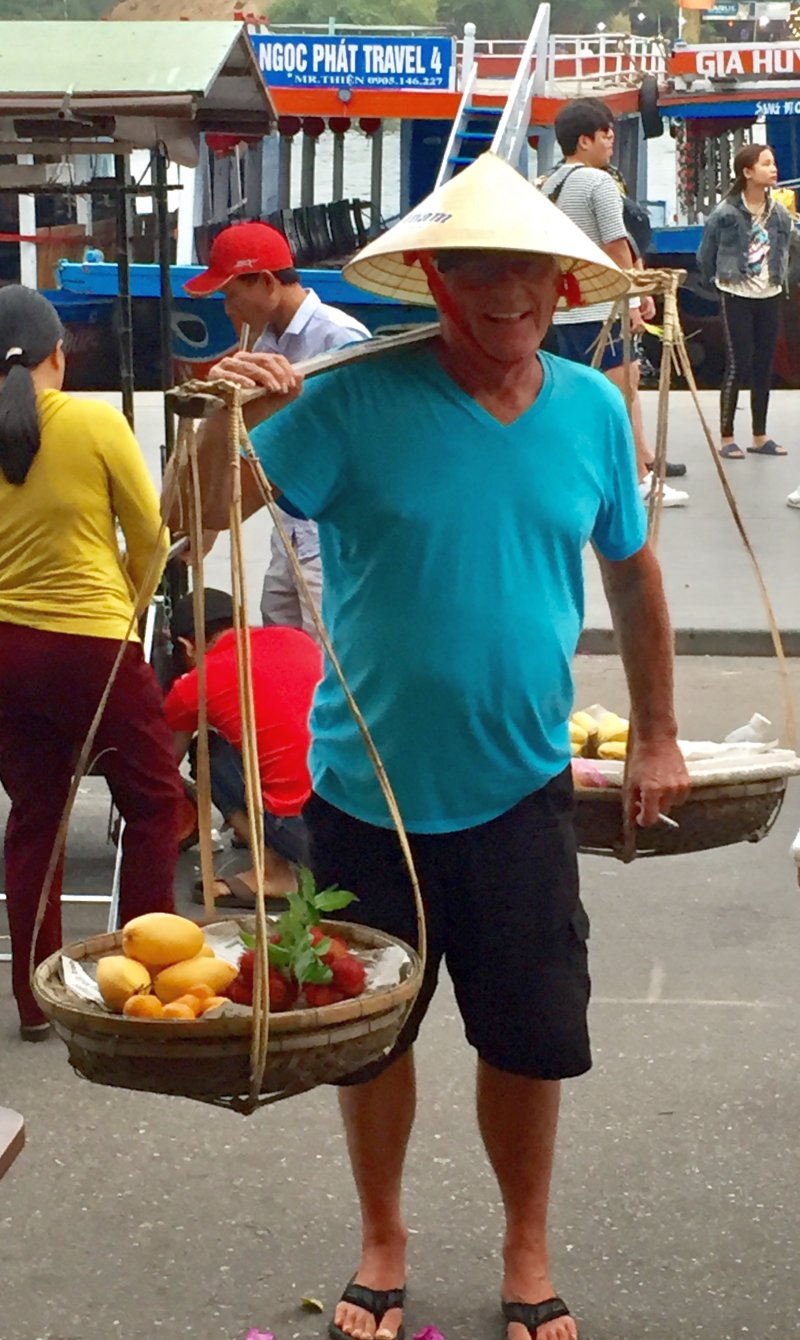 Every time I look at this picture I chuckle. This is encouraged by the ladies who sell the wares in the basket. After you hang on to the them you are obligated to buy some fruit. The bananas were delicious. 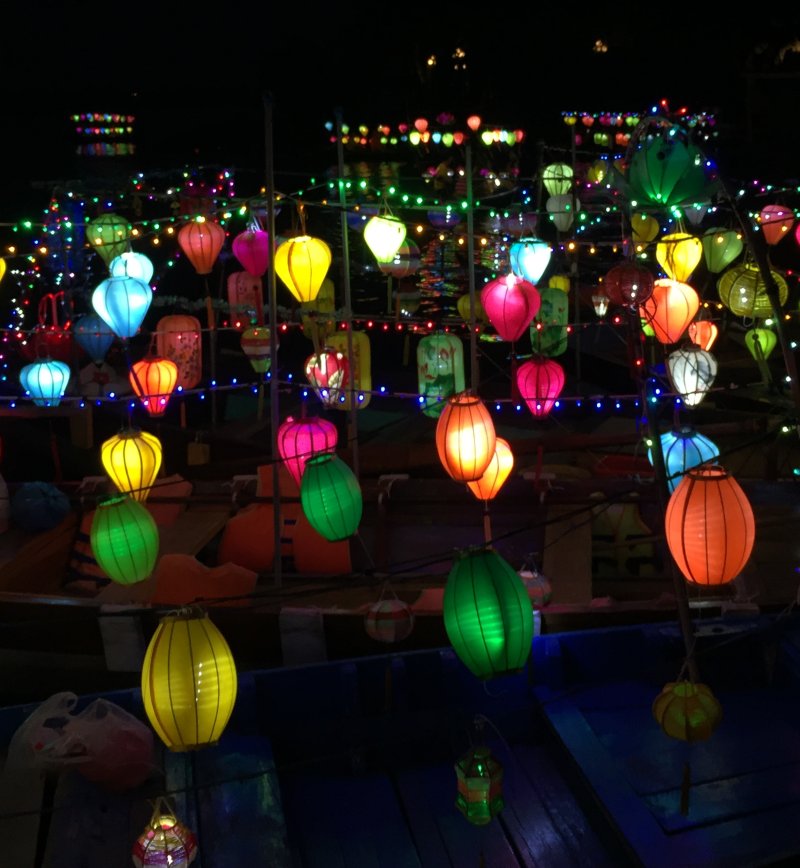 This is what it looks like in old Hoi An at night . The lanterns are lit up and placed on boats that can be rented for a period of time. 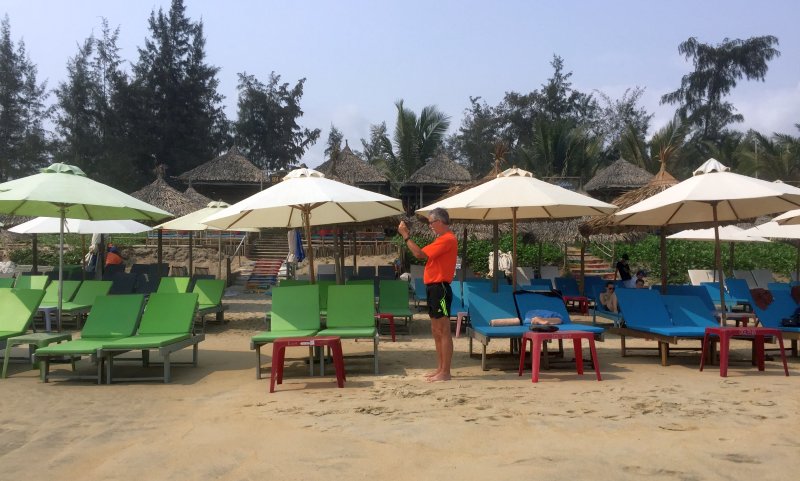 The shuttle to the beach is about 10 minutes away. The chairs are free in exchange for buying a beer or food from the restaurant. 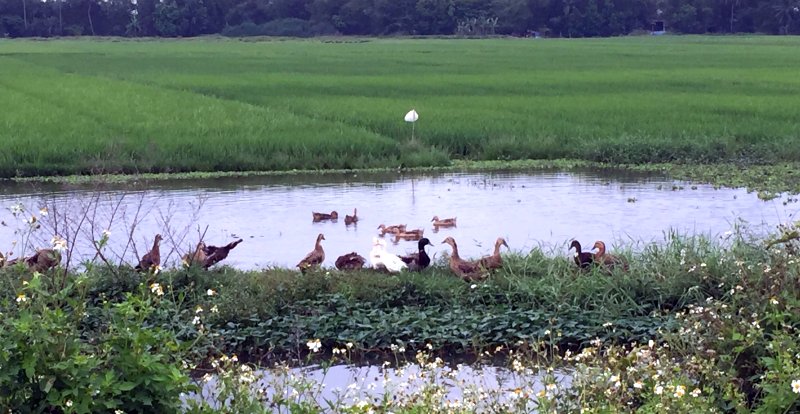 Rice paddies with free range ducks are down the bicycle path. 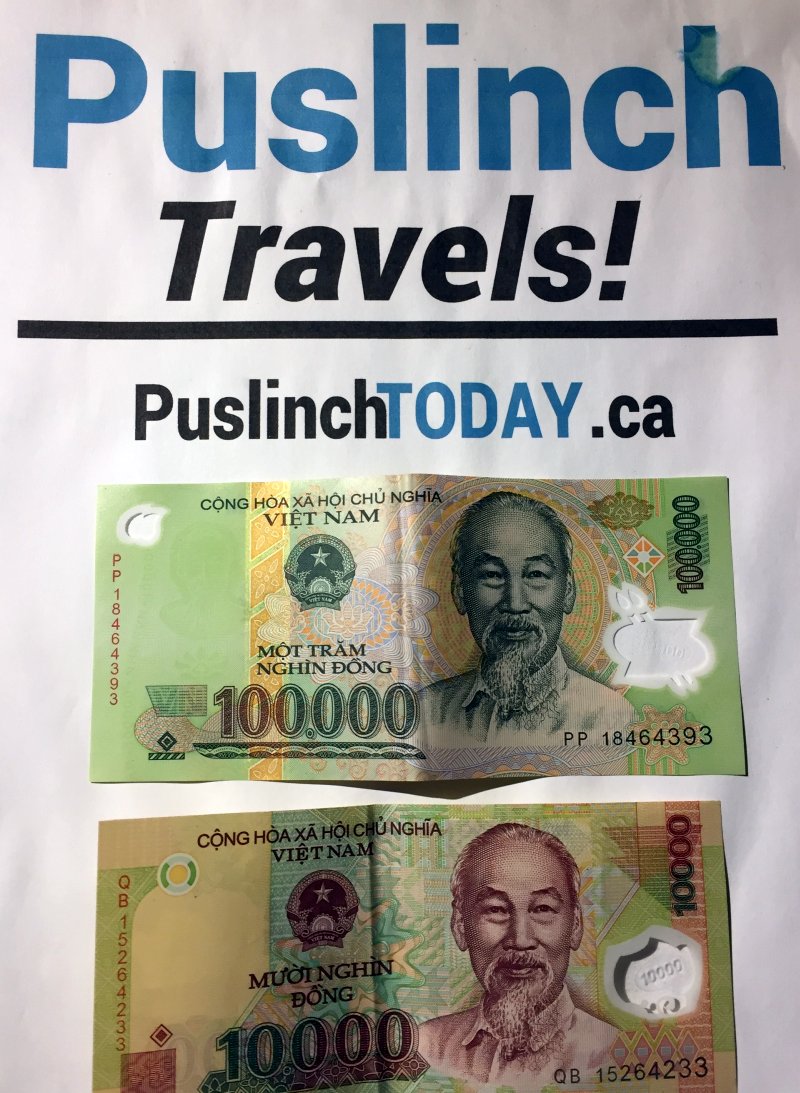