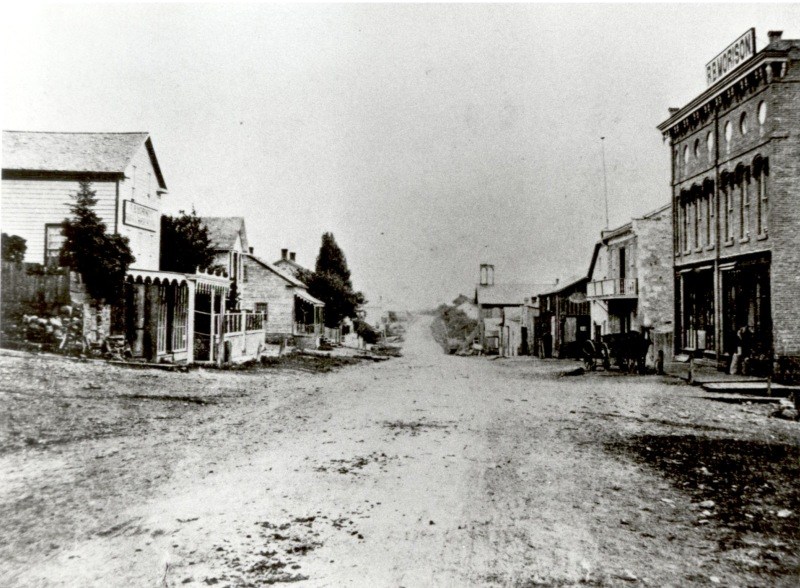 This photo was taken around 1860, just after the completion of the new , yellow brick store for R. B. Morison. In fact, the sign is still on his previous building, directly across the road.

One of the first residents of Morriston and the man, for whom it was named, Richard B. Morison was born in Perth, Scotland on October 9, 1826, He emigrated to Canada with his father and his aunt in 1840, the voyage lasting five weeks. On the same ship was a contingent of Highland Scots settlers, headed by Donald Dhu (Black Donald) McPherson, who settled on the 1st concession of Puslinch.

R. B. resided with his father in Niagara district until 1847, when he set up a store in one end of John McEdwards’ blacksmith shop in what later became Morriston. As this was very successful, he built a frame premises on the east side of the Brock Road, moving into it in 1849. He was appointed Postmaster in the village in 1854 and was also named a Justice of the Peace.

In his yellow brick building, built in 1860, he employed tailors, shoemakers and milliners, as well as selling all sorts of produce and furniture and almost anything required by the surrounding villagers and settlers. He was married and raised a family in the village. R. B. died in Morriston on February 16, 1907 and was buried in Crown Cemetery.