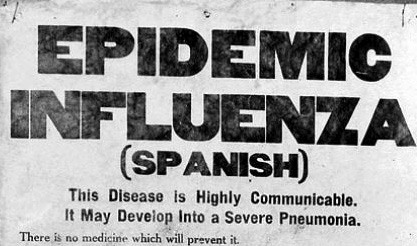 Influenza or “La Grippe” as it was usually termed in earlier times, was present through the ages, just as it is today. No records were kept but almost the entire population of the native people of the Antilles died from an epidemic, symptoms of which resembled influenza, after Christopher Columbus arrived in 1493. The first pandemic on record occurred in 1580. The word “La Grippe” comes from the French and was said to have been first used by philosopher, William Molyneux, in 1694.

It was first mentioned in Puslinch, when the Morriston correspondent to the Guelph Mercury wrote that an epidemic of La Grippe had taken a strong hold on the community on Dec. 19, 1893. New cases were being reported every day but the correspondent remarked, that it was of a much milder variety than the previous outbreak.


“Mrs. Thomas Fyfe is recovering from an attack of la grippe. Several are suffering from that common enemy, amongst the rest being the family of Mr. Lisso, every member of his family being ill at the same time.”

The Spanish Flu raged over the world during 1918-1920, afflicting a great many in Puslinch and eight people from the township died. Since then we have been attacked by Hong Kong Flu, Bird Flu and Swine Flu.

The version described in a newspaper item on March 15, 1915 by the Strachan’s Corners correspondent sounds much like the types, that we have experienced of late years: “An epidemic of influenza, accompanied by severe sore throat, has been in many homes lately.”

Which brings us to our present disease, a pandemic to rival the Spanish Flu, which none of us will forget soon.