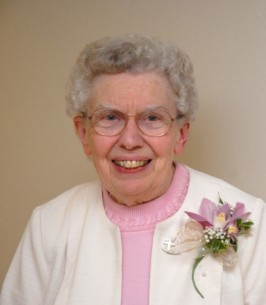 The Congregation of the Sisters of St. Joseph in Canada, (Hamilton) are saddened to announce the death of Sister Patricia (Vianney) Hanlon at University Hospital London, Ontario on April 24, 2020 in her 69th year as a Sister of St. Joseph. She was the daughter of the late James Raymond and Mary Katharine (Mahon) Hanlon. She was predeceased by her sisters, Rita and Sister Virginia CSJ. Sister Patricia will be remembered with love, respect and gratitude by her sister, Katharine (James) Meechan, nieces and nephews and their families and the members of her religious family, the sisters of St. Joseph, especially her friend and companion in ministry, Sister Giovanni Finoro.

Sister Patricia was a woman of prayer and faith. She possessed that rare combination of professional competence, personal compassion and humility. She began her life of service in the Healthcare Profession in 1955 at St. Joseph’s Hospital, Guelph as a Pediatric Teacher and Director of the School of Nursing and then ministering at St. Joseph’s Hospital, Hamilton as the Supervisor of the Emergency Department. In 1968 she stepped away from Healthcare to become involved in the Congregational Formation Program, serving as the Director of Formation. Sister Patricia returned to St Joseph’s Hospital, Hamilton in 1981 where she worked in Pastoral Care until her retirement in 2017. Throughout those years she also took on an extensive telephone ministry deeply meaningful to so many people. In Sister Patricia’s retirement she continued to volunteer in Pastoral outreach to hospitals, nursing homes, funeral homes and beyond. In the fall of 2019, she was welcomed along with other Hamilton sisters into the St. Joseph Residence in London.

There will be a private interment at Holy Sepulchre Cemetery, Burlington. A Memorial Mass will be celebrated at a later date. Condolences can be sent to: Suite 302, 911 Golf Links Road. Ancaster, Ontario, L9k 1H9

In lieu of flowers donations may be made to the Sisters of St. Joseph in Canada for the works of the Congregation. Online condolences can be made to www.dermodys.com