In case you missed it, February 9 was National Pizza Day in both the US and Canada. At Valensbrae Sheep Farm, pizza-anything rings true. But lamb on pizza? That was a new idea for us. But not for cooks from the Middle Eastern countries of Lebanon, Syria, Armenia and Turkey.

The traditional Lahmacun or Lahmajoun is a dough wrapped around meat and vegetables [pickles, tomatoes, peppers, onions, lettuce and roasted eggplant] and spices [cayenne pepper, paprika, cumin and cinnamon]. The Lahmacun dough however, is more of a flatbread rather than a pizza dough.

Flatbreads were cooked in tandoors or metal of frying pans for thousands of years, then used to wrap food in for convenience and portability. The adoption of the stove oven allowed for new cooking techniques introducing stuffed Lahmacun or Lahmacun flat and topped with meat and vegetables. The real bonus, is that everything could be baked together.

By the 1960’s every variation of the Lahmacun was popular across the former parts of the Ottoman Empire. Though, the ‘stuff’ on top, resembles pizza, it’s only in modern times that it has taken on the European name and features of pizza, with one main difference, Lahmacun does not contain cheese.

This recipe was first published in Food & Wine by Semsa Denizel in 2012. Denzil has a takeout shop in Istanbul Kantin Dükkan, where she tops her pizzas with ground lamb (flavored with sweet sun-dried tomatoes and a little spicy red pepper). To make the pizza even more substantial, she includes an egg on top; the runny yolk is terrific with the whole-wheat crust.

This recipe calls for making your own dough. That might be a little tough on a busy weeknight, so purchasing a substantial flatbread might be a reasonable substitute. 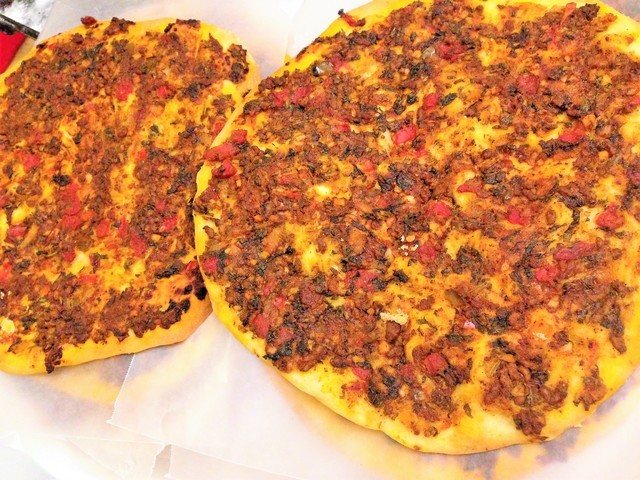 Preheat oven to 450°. Arrange oven racks on the top and bottom thirds of the oven. Preheat a large rimmed baking sheet in the oven for about 5 minutes.

In a small bowl, whisk the whole wheat flour with the all-purpose flour and salt. In a large bowl, combine the warm water and honey. Sprinkle the yeast over the water and let stand for about 5 minutes, until foamy. Stir in the olive oil and then the flour mixture. Gently knead the dough on a work surface until it forms a smooth, somewhat sticky ball. Lightly oil another bowl and add the dough. Cover with plastic wrap and let stand in a warm place until doubled in bulk, about 1 hour.

In a skillet, heat the 1 tablespoon of olive oil. Add the onion and cook over moderate heat until translucent, 4 minutes. Add the lamb and garlic and season with salt and pepper. Cook over moderately high heat, breaking up the meat with a wooden spoon, until the lamb is no longer pink, 3 minutes. Add the sun-dried tomatoes, red pepper paste and cumin and cook, stirring, for 1 minute. Remove from the heat and season with salt and pepper.

On a lightly floured work surface, punch down the dough and cut into 4 pieces. Roll each piece into a 6-inch round. Arrange the dough rounds on the preheated baking sheet, about 1 inch apart. Bake on the bottom shelf of the oven for 2 minutes.

Spread the lamb topping over the dough, leaving a 1/2-inch border around the edges; brush the borders with olive oil. Crack an egg in the center of each pizza (if using) and bake on the top shelf of the oven for about 6 minutes, until the crust is crisp on the bottom, the egg white is firm and the yolk is runny.

Scatter the parsley over the pizzas and serve hot. Enjoy!