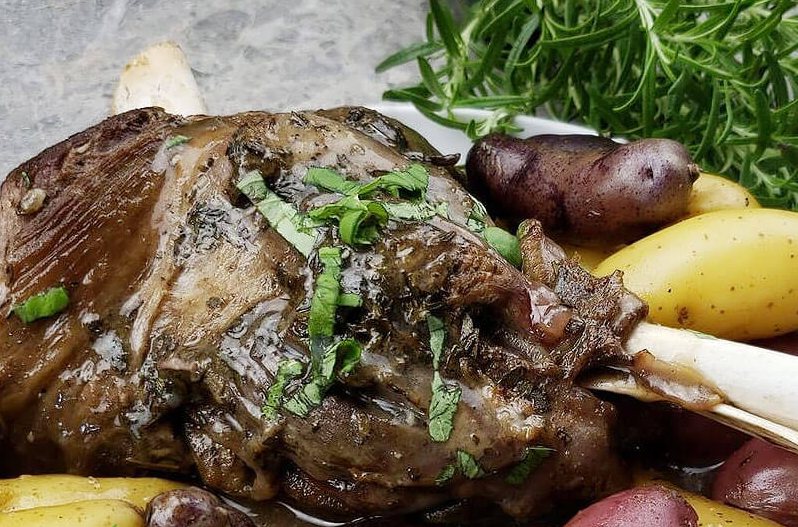 Leg of Lamb Accompanied by Potatoes Adapted for Instant Pot®

We’re still talking about the Instant Pot®, and how it has introduced pressure cookery to a new generation of cooks.

Seasoned cooks have many stores of pressure cookers exploding coating the walls with mashed potatoes or worse hurting someone. Thankfully the Instant Pot® has added several safety lid-detection features making it almost impossible for anyone to open the lid before the pressure is released.

What is interesting about the Instant Pot® is that it’s a Canadian invention.

Under the leadership of Instant Brands Inc. a team of Canadian technology veterans were tasked with finding solutions to food preparation that would take less time and hopefully reduce the consumption of fast food. That was 2009.

A huge success, Instant Brand Inc. continued to raise the bar on functionality, safety and being really super user-friendly.

For meats like mutton or lamb, appliances such Instant Pot® reduce the cooking time while continuing to maintain the wonderful flavouring that often comes with long cooking times.

Instant Pot® – The pot that does the work of several appliances and talks to your phone.

With Easter around the corner, we wanted to find recipes that would allow our readers to serve Leg of Lamb to their families, without spending the entireday in the kitchen.

Turn Instant Pot to sauté. Let it get quite hot before drizzling in olive oil.

Put the roast in, and swirl it around until it is coated with oil. Sear on one side, then the other. Prevent sticking to the bottom.

Sprinkle the roast with the salt, pepper, and all herbs.

Add broth and seal the Instant Pot, set to high pressure for 45 minutes.

When done, release pressure and open the lid.

Whisk the arrowroot into 1/3 cup of water and add to broth in pot. Stir to thicken.