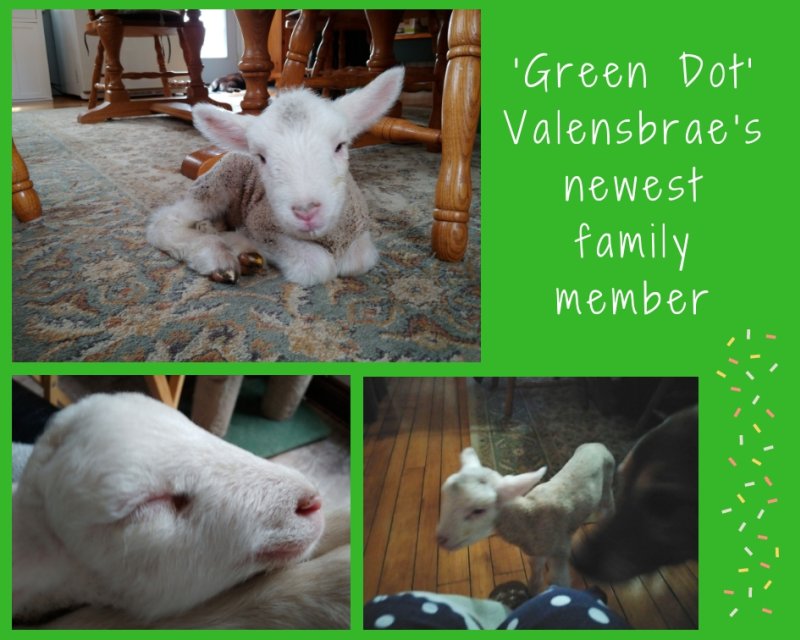 Found late April, he was in the paddock lying on his side and barely breathing. The family brought him into the house to be warmed and fed.

Everyone in the family took turns bottle feeding him and by mid-May he started on creep feed.

‘He’s absolutely taken to living in the house’, Ted Stark chief shepherd at Valensbrae was saying. He wears a small dog diaper in the house, which he doesn’t like, but tolerates. He chases the cats, follows the dogs and is a second shadow to Ted – all day long.

Every day, he is taken up to the paddock to be with the other sheep. ‘We wanted to make sure that he understood he wouldn’t be hoteling it permanently in the house’ said Ted.

In order to make sure that Ted was always returning with the same lamb, he spray-painted two green dots on the lamb’s back. And that’s how GD earned the name Green Dot or GD for short.

At 25-30 pounds GD can easily get into everything. And of course he jumps – up on the sofa to watch TV, up and down the stairs and anywhere else, he thinks he should be.

He would follow Ted out to the barn around 7AM, and spends the day with the sheep either in the barn or out in the paddock. Ted likes to leave bales of hay in the barn for rain days when the sheep prefer to be inside.

When it’s time to bed the sheep for the night, GD followed Ted back into the house for his last bottle and a sleep over.

At the end of May, GD was neutered, and by the end of June he was staying overnight in the barn with the other lambs. Ted still bottle feeds him twice a day, but no more overnights in the house, he was just taking over.

GD will spend the rest of his days at Valensbrae. “He’s a member of the family now” stated Ted. “He’s a rambunctious member, but we love him just the same.”

Valensbrae Sheep Farm is open for tours. Just call ahead, to let us know you are coming. The hens, pigs, llamas, sheep and 35 lambs are always happy to have visitors – especially GD.