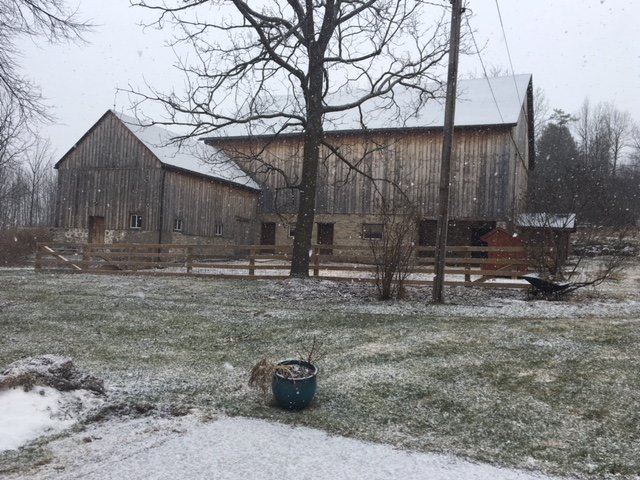 Even during winter, Valensbrae Sheep Farm remains a busy place!

The sheep spend the entire winter outside – 24/7! And they just love it!

Shorn in early May, it takes until early November for their big, heavy coats to return. The thickness combined with the natural lanolin residue, keeps the sheep toasty all winter.

Ted Stark, Valensbrae’s Chief Shepherd has allotted a 1.5 acre paddock for the sheep. The area doesn’t get much snow, but the wind can really whip, which can be annoying. A protective shelter, complete with roof, was installed where the sheep congregate and get out of the wind.

They aren’t alone out in the field. Ben & Jerry, Valensbrae’s protective llamas love to spend the winter outside roaming the paddock. They too have protective coats that keep them warm.

Both the sheep and llamas are served-up hay all winter using a bale feeder. Big round hay bales are brought out to the feeder about every 3 weeks.

An automatic water system was installed just this fall. In previous years, Ted had to haul water out to the field about three times a week.

The new water system feeds directly from the barn to the field via underground pipes positioned below the frost line. The sheep’s drinking bowl has a thermostatic heater that automatically turns on, so that the water doesn’t freeze.

While the sheep love spending the winter outside, the lambs are another matter. They were weened and separated from their mothers early in November and brought inside to spend the winter in the barn.

Around the same time, the ewes selected for lambing were also brought into the barn and fed a special grain mixture in preparation to bare lambs.

The first day of December, Randy the Ram was placed in the same pen with the ewes for mating. Sheep have a 17-day cycle, so Randy remains in the same pen for 35 days – or 2 cycles, with the hope that some of the ewes are impregnated.

The gestation period for lambs is about 5 1/2 months, and then it starts all over again.

It’s great that the sheep have thick warm coats to keep their bodies warm, but what about their legs and feet, don’t they get cold?

Ted has a deep infectious laugh.

“Sheep don’t get cold feet, they are a hearty lot and just love being outside. In fact it’s the best place for them”.

Indeed the Valensbrae Sheep are a hardy flock, especially the Shetlands who originated from the Shetland Islands in Northern Scotland – up close to the Arctic Circle. They know cold!