We’ve talked a lot about lamb in stews, but lamb works perfectly in soups as well. What’s the difference you say? Good question.

According to TheKitchn, the difference between stew and soup is the amount of liquid, stews not only contain less liquid but it tends to be thicker.

Soups also take less time to cook, sometimes as little as 20 minutes. Stews on the other hand, tend to use larger and tougher cuts of meat generally requiring a longer cooking time. And the longer cooking time, also reduces the amount of liquid in the end product.

So, if you start off making soup, and more liquid evaporates than you planned, you can simply switch things up and call it stew.

And of course, if all else fails when cooking stew, it’s absolutely within your rights to add wine or beer (as in Guinness) to bolster the flavour.

The Valensbrae Sheep Farm team did some more research into lamb soup, and found that the Ciorbă de Meil or Lamb Soup is a staple at Easter in Romania. The recipe describes the sour soup “as an explosion of celebration of new herbs coming to life in spring”.

Romania is located in Eastern Europe, one of the many countries with a border on the Black Sea. It is surrounded by Bulgaria, Serbia, Hungary, the Ukraine and Moldova.

Romanian cuisine has been influenced by a number of different European cuisines (Austrian, German, Greek & Hungarian) while incorporating the cuisines of many Slavic-speaking countries of Eastern Europe (Serbia, Bulgaria, Poland and the Ukraine).

Ciorbă (pronounced shorba) is a general Romanian reference to ‘sour soups’ which consist of vegetables, meat and a wide variety of sour ingredients including: lemons, sauerkraut juice or as in this recipe, apple cider vinegar.

Ciorbă refers to the broth and vegetables, with the meat tagged on at the end. For example tripe or calf foot soup would be known as Ciorbă de Burta.

Ciorbă is a widespread and popular dish in Romania, and is occasionally considered the equivalent of chicken soup, laying claim to beneficial health effects such as stimulating digestion or fighting colds.

This recipe is from Gourmet European Recipes, a really interesting recipe site chalk full of historical explanations along with cooking ingredients and techniques. 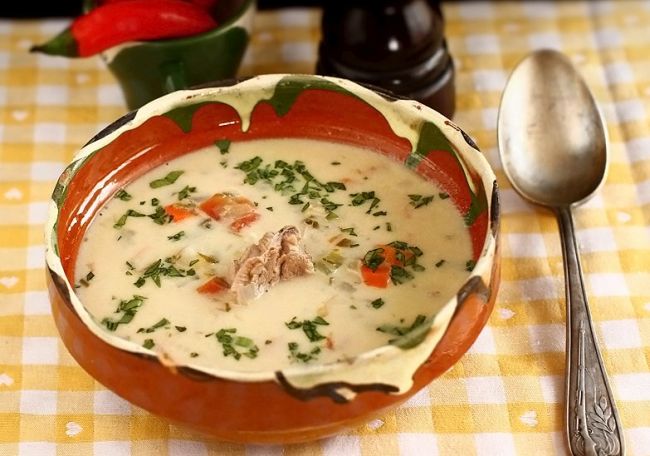 Cut the lamb meat into small-medium pieces and place is a large pot with 8 cups of water seasoned with salt. Bring lamb to a boil and then simmer for 15 minutes. It will foam frequently, and it should be removed.

Add the rice and simmer for another 15 minutes. Chop the onion, parsley and green chard and add them into the broth.

Beat an egg with 2-3 tablespoons of sour cream and mix with some broth. Season to taste with apple vinegar (or lemon juice). Remember you are aiming for that tart, sour, explosive taste!

Serve hot with a hot pepper on the side.